You are here: Home / About Us / History

The Mid-South Peace and Justice Center’s mission is to engage, organize and mobilize communities to realize social justice through nonviolent action.

This mission has developed since 1982 when the MSPJC formally opened on Martin Luther King, Jr.’s birthday—January 15th. Inspired by the International Peace Center in Antwerp, Belgium, as well as similar peace centers elsewhere, members of Pax Christi’s “Swords and Plowshares” discussion group began to seriously consider developing a local peace center. In June 1981, a group met to discuss the initial proposal. A small task force began to work full-time on building the structure for what would become the Mid-South Peace and Justice Center. A subcommittee chose Prescott Memorial Baptist Church as the location for Memphis’ new peace center. 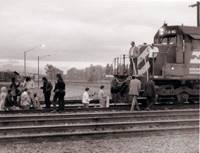 The date of the MSPJC’s opening was no coincidence. The Center was founded on the legacies of Martin Luther King, Jr. and Mohandas Gandhi, meaning it is grounded in the spirit of nonviolence. The Center was also faith-based, but not to any particular religious group. The original mission statement supports these two founding principles:

As people of faith, we are inspired by hope for a just society within a just global order. We are actively implementing a vision for our community and the world marked by enduring peace that results from economic, political and social justice. The Center works by utilizing a variety of personal gifts and collective means to help individuals and groups to educate and empower themselves for participatory change in national, state and local policies in a common spirit of nonviolence.

The Center then settled on four priorities to begin its work: disarmament, Central America, South Africa and local issues. The task force dedicated to disarmament advocated banning the testing, and eventually the use, of nuclear weapons. This task force emphasized the need for military spending to be diverted toward satisfying human needs. In 1984, as part of an ongoing effort to halt trains and trucks carrying nuclear weapons, the Mid-South Peace and Justice Center stopped the passage of the “white train” through Memphis, successfully derailing nuclear shipments throughout the U.S.

A second task force opposed U.S. military involvement in the Central American countries of Nicaragua, El Salvador, Honduras and Guatemala. Most of the work focused on El Salvador and Nicaragua. In El Salvador, the goal was to stop the funding and death squads committing human rights abuses. Around 75,000 people were killed, the majority by the Salvadorian military and the death squads. In Nicaragua, the civil war between the U.S.-backed contras and the Sandinistas resulted in the deaths of thousands. The Center advocated ending U.S. funding of the contras, sent delegations to Central America and partnered with local churches as part of the underground railroad for those fleeing the human rights abuses in Central America. 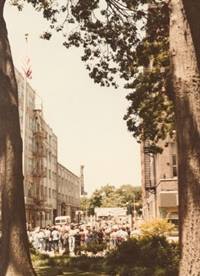 The Center also worked on issues closer to home. The local issues task force became famous for ‘Toxic Tours’ that highlighted the class inequity present in the locations of the biggest industrial polluters. Interested community groups that wanted to see industrial facilities, chemical plants and dump sites were taken on tours of these areas, which were largely located near low-income communities of color. Two staff members worked on environmental issues—conducting “Toxic Tours,” public hearings, an Earth Day event and community workshops to raise awareness of environmental issues in neighborhoods. This local issues task force also concentrated on forcing banks to meet the credit needs of low-to-middle-income communities. Beginning in the mid-1980’s and under the leadership of Executive Director Hubert Van Tol the MSPJC systematically challenged the red-lining practices of banking institutions in low-income communities throughout Memphis.

As a “peace center” the MSPJC has always drawn the connections between the violence of war that our government sponsors abroad and the violence of poverty that grips our communities here at home. As millions of dollars are spent on death and destruction abroad we have been a consistent voice for a restructuring of our priorities towards rebuilding our communities at home and where we have destroyed them abroad. This work began in earnest during the first Gulf War that began in 1991, continued through the Iraq sanctions over the next decade that killed hundreds of thousands, and has been active through to todays wars in Iraq and Afghanistan. MSPJC members have protested by the hundreds, held vigils that lasted for years, and sent delegations to witness the first hand effects of war on the ground in war zones. 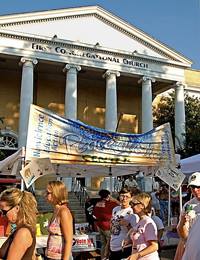 Now, the Center is primarily concentrating on the needs of communities within Memphis and the rest of the Mid-South. We seek to build a movement, led by people directly affected by injustice, that can fundamentally shift power from corporate boardrooms and government committees to our communities. Our work is currently focused on economic equality, housing, criminal justice reform, homelessness, protection of civil liberties, food justice and international solidarity with people of war-torn and occupied states. We work with and are led by grassroots leaders from the low-income communities of color most impacted by these issues. Coalition partnerships range from other grassroots organizing groups to advocacy organizations, labor organizations, local governments, neighborhood groups, churches and intergovernmental organizations and committees.